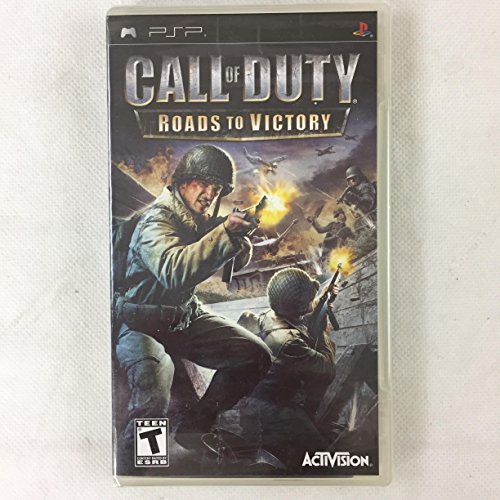 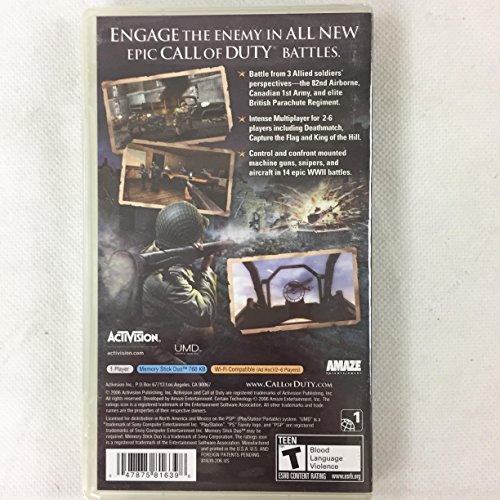 Engage the enemy in all newepic Call of Duty battlesProduct InformationCall of Duty: Roads to Victory delivers the intensity of being closerthan ever to the fury of combat during the battle for the Liberation ofParis the most harrowing campaign of WWII known as The NormandyBreakout.   Through a seamless narrative Call of Duty: Roadsto Victory delivers the rush of unrelenting battle and breathtakingaction of the Allied offensive that changed the fate of the world.Product Features Battle from 3 Allied soldiers’ perspectives – the 82ndAirborne Canadian 1st Army and elite British Parachute Regiment. Intense Multiplayer for 2-6 players including DeathmatchCapture the Flag and King of the Hill. Control and confront mounted machine guns snipers andaircraft in epic WWII battlesSpecifications Players:  1 Player Memory Stick Duo:  768 KBMinimum Wireless Compatible:  2-6Players

Players will face the full onslaught of the German war machine throughout 14 intense battles
Four precise control schemes, allowing players to select the one that ensures an optimal handheld experience
Players will be able to effortlessly change stance from standing to prone, throw grenades and target enemies in order to survive this ultimate WWII combat experience
Multiplayer options for up to 2-6 players to pick-up-and-go in modes such as Deathmatch, Capture the Flag and King of the Hill for quick hitting, over the top action