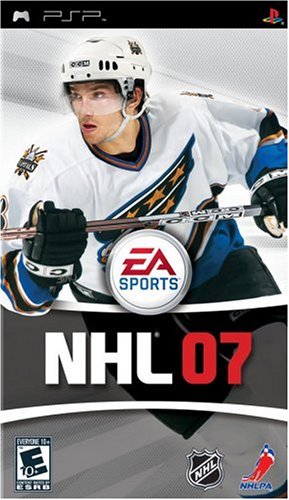 NHL 07 is a revolution in hockey gaming. Its dual analog control revolutionizes how hockey video games are played. Organic goalie controls and advanced new features take your game further, for the kind of hockey you’ve always dreamed of playing.
Experience the most realistic sense of player control ever as you make every move including shooting, deking, and checking with the analog sticks. Make upper body stick-handling movements with one hand while controlling every glide and turn of the skates with the other. Take over a game with an enhanced control system. On offense protect the puck, pull off spins, and dictate the velocity of every shot during scoring opportunities, or take away scoring chances with bone-crushing body checks and aggressive pressure on defense. Utilize the skills of your finesse players to stick-handle through the zone, playmakers to set up scoring opportunities, and power forwards to use their body to drive past defenders. Or take advantage of the size, strength, and skill of your defensive defensemen to muscle and angle players off the puck. Players look and react more than ever like their real-life counterparts. See a sharpshooter’s stick flex on a blast to the net, a net minder look a puck into his glove on a big save, and how a goalie’s pads remain flush to the ice in and out of the butterfly. Sign and trade players, and negotiate contracts under the salary cap based on the new CBA. Once signed, it’s up to you to mold young players into the superstars of tomorrow while keeping the team’s overall confidence at its highest level. Dynasty with new CBA and Salary Cap Depth Feel Like a GM, without the micro-management New in-game announce team of Gary Thorne and Bill Clement

Take control of your shot; undress defenseman with moves you create
Defenseman play positional sound defense & have upper body control, to take forwards off the puck
Identify each players strengths and use their abilities to the fullest
Stunning Player Visuals with secondary motion