TikTok in China, which is commonly known as Douyin introduced its own online payment method. The two most commonly used applications for online payments in China are AliPay by Alibaba and WeChat Pay by Tencent which cover over 90 percent of the electronic market alone.

TikTok in China, Douyin introduced an in app online payment option called “Douyin Pay” which is present in the short video app alongside AliPay and WeChat Pay.

Companies need a license to run online payments within their app, but in 2016 Beijing stopped issuing the license as it was a risk in the rapidly growing financial segment. So how did Douyin acquired the license? Well before the license was stopped being given out, a license had already been issued to a company called Wuhan Hezhong Yibao Technology and last year TikTok China bought that company in September and hence acquired the license as well.

According to Douyin, this in app payment option is very reliable and will enhance user experience as well as supplement the existing major payment option. Unlike TikTok from around the world, Douyin offers its users a feature where they can directly get linked to the source offering a certain product by clicking on the short video. For example, if a creator makes a video wearing a certain shirt, the brand can pay Byte Dance to link that video to the website where the product is sold. The user, when taps on it is immediately linked to the source where they can buy that certain product. It is a great way for brand marketing.

Even though AliPay and WeChat Pay are the most commonly used methods to transfer online payment in China and a lot of brands when rivaling have failed, Douyin future kind of looks positive, they have launched Cash filled Red Packets on their app. Users can receive cash filled red packets from Douyin campaign and transfer that money into their accounts. Red Packets or Red Envelopes are gifts which are given during the holiday season or on some special occasion in China. Douyin has launched their money filled red packets on a very great timing as the Chinese New Year’s Holiday is right upon their heads and people gift each other red packets during this season, and during Covid times when they cannot go out what better way to send love online through the money filled red packets from Douyin.

Though Douyin Pay is still new and even though the Alibaba and WeChat Pay do hold a great place in the Chinese society we cannot wait to see what the future is for Douyin Pay. 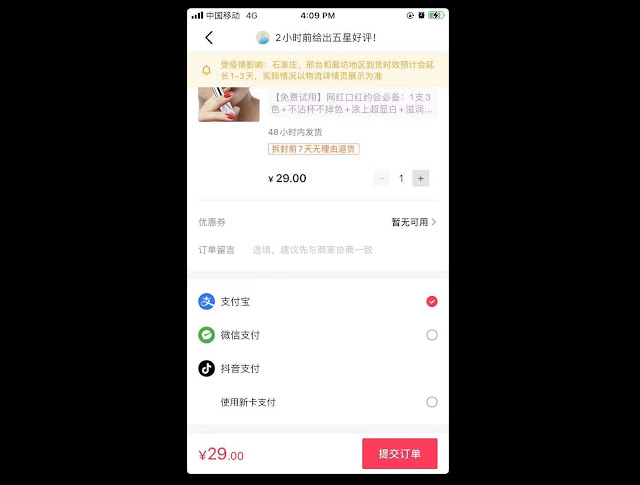