Google has announced that it is coming up with a new update for its two-factor authentication prompt on Android. The technology giant also confirmed that the latest update also includes support for dark mode. If we compare it with the previous iteration; the new Google prompt shows the usual line which asks “Is it you trying to sign in?” along with the email address.

Well, the good part of this update is that it has increased readability as it is no longer grouped with other unnecessary information like Device type, Location, and Time. Moreover, the options of “No, it’s not me” and “Yes” are observed to be written in the proper case, as compared to before when all the letters were capitalized. The Material Theme outline style has also been improved, as the red “X” and green checkmark reflects visual improvements Google has tried to bring in its new update.

Unfortunately, Google’s dark mode is not available to many of the users as of now. However, reports suggest that some personal account users are already experiencing this while others are not. The ones who have spotted the dark mode on Android are over at 9to5Google. Additionally, users with the Google Workspace suite are yet to experience the dark mode. This dark mode for two-factor authentication was first spotted in 2019 and hasn't rolled out yet. This update was followed by Google’s introduction to the theme on Search for desktop users. As the update isn’t available to all the users, there is no option to manually enable the dark mode.

Security-savvy users understand that how hackers are trying to trick them by applying tons of new strategies, including the visual tweaks as part of their phishing campaigns. So, don't be surprised, if you, in near future, spot a dark theme on sign in prompt pages, because this time it is actually Google and its engineers who want to give your "sign in" pages a new look.

A Google Spokesperson informed the media outlets that the company is always trying and testing new ways to improve the users’ experience, however, it is short of something new to announce for the time being.

The current two-factor authentication works within 2 steps which are for the stronger security of your Google Account. You will also be able to protect your account with your password but also with your mobile. This authentication won’t let the third party spy on you; even if it has access to the password of your account. Let me tell you how it works and what will you have to do to login. Firstly, as usual; sign in to your Google account by entering the password, and the next step is to enter the code that will be sent to you through a phone, text, or voice call. If you already have the security key, you can insert it into your computer’s USB port.

Keeping the Google Search on desktop and two-factor authentication on Android aside, Google has also lately been successful in introducing the dark mode on “My Activity.” It has latterly updated the dark mode for ChromeOS users on Windows 10 and macOS. 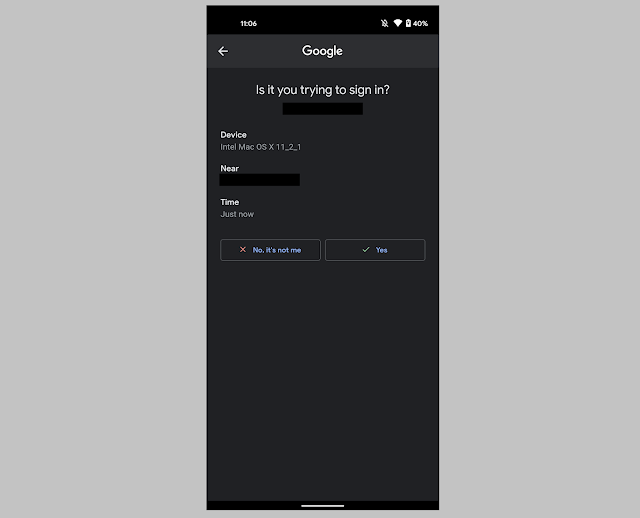